On a day like today... OK, let's be honest. Whatever you are dealing with right now, today, (for me) this month, this year, don't you think it is important as ever to, every once in a while, just stop- and breathe. And not just the kind of breathing you are doing right now while reading this, the kind where you step back and really think about it, in and out, your chest rising and falling. Intentional Breathing. 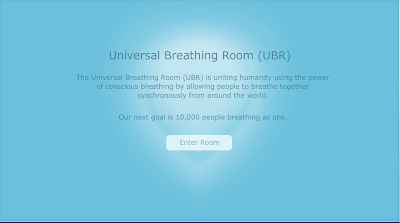 Well there is a place online called the Universal Breathing Room, it's goal is to have more people to stop for just a minute a day and breathe-intentionally. The website says that through conscious breathing all of your bodily systems work better, and more efficiently. And by the whole world doing it together (besides it being cool), we are all brought to a common harmony, if you will. 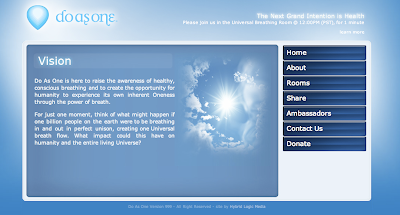 They also have a feature that you can "intentionalize" your breathing. Using this feature you are focusing on a certain thought our purpose while breathing, in hopes to achieve that goal. For example; Peace, Harmony, Forgiveness, Acceptance, the list goes on and on, you can also create your own. They also have them schedule at certain times so you can log-on and consciously breathe with the intention of Compassion at 5:00 P.M. (CST), with the rest of the world. 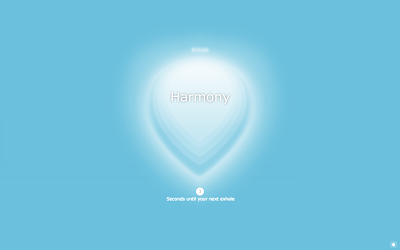 I entered the breathing room for 2 minutes today. It stressed me out a little because I wasn't breathing in synch with the other 5 people across the globe (i don't have the lung capacity), but once I muted the sound effects on the website, and just focused on breathing instead of getting it right, I felt better, more willing to accept relaxation-but not quite relaxed. Regardless, I really enjoy the concept, so give it a try.
Posted by Hannah at 1:30 PM No comments:

Email ThisBlogThis!Share to TwitterShare to Facebook
Links to this post
Labels: breathing, conscious breathing, Do as one, intentional breathing, relaxation, stress, stress-relief

The times, they are a-changin'

I have had so much anxiety they last few weeks, ok fine, lets be honest, since my birthday, which is why I started this ridiculous task. And for a while it was feeling like I wasn't going anywhere, and I wasn't accomplishing anything. But, it is starting to feel like things are changing!!
FINALLY!!!
And you may be thinking well you finally got off your arse and did something, but in all honesty I was trying. I was trying to complete things on my list, but a lot of them were harder than I thought they would be. But now that it feels like I'm getting somewhere, the ball is rolling, and I hope it doesn't stop.
I have been sending out resumes like crazy for full time, and part-time administrative assistant, internship positions and I finally got calls this week. The first call was for an internship that starts in January 2010, and goes through Fall 2010. It's unpaid and doesn't start until January (which i had been hoping to start before then), so that is the downside, upside is that it will last almost a year, and sounds like an ideal position as far as the experience I'd be getting. The other I had an interview the other day, and it went well, This also sounds like an ideal position, and it would start as soon as possible, which is FANTASTIC! I don't know whether this one is paid or not, but I'm trying not to worry about it, because really, I need the experience, and I would be lucky to get anything they give me. So the job hunt is going well!!

I also have recently started assistant coaching my high school dance team, which has been so much fun. It's quite a bit different than when I was in high school, as far as the personalities on the team, and the vibe you get when you're with them. They aren't all at the level of technique I had hoped for, but they all seem to want to get better. With me at the helm, they'll be whipped into shape in no time. But besides that these girls are helping me more than they know. They will be keeping me busy with practice, and paperwork, keep me focused-because being so busy I won't have time to dilly-dally, and keeping me in shape-at least better shape than I have been in. I'll be moving around more, and more motivated, eventually I will have more energy, and above all I am BACK IN THE STUDIO, around dancing, around people who LOVE dancing. It's like I can breathe again.
I have been more happy this week than I have been the last 6 months, and it feels good. Things are coming back together for me, and it feels real good.
Posted by Hannah at 6:25 PM No comments:

Are you there motivation? It's me, Hannah

I am going to continue my successful plan of blogging on Friday nights so no one reads this, so here it goes.
I am happy to announce that the H1N1 and bronchitis is now subsiding, and I am almost back to normal. I went back to work for the first day in (almost) 2 weeks this past wednesday, and so far so good. Some days my body feels like it is being squished in a mammogram machine, and I am still perpetually exhausted, but I am about 90% better, which feels amazing!
The plus side to having been stuck in bed (or couch) is that I sent out approximately 300 resumes in the last 2 weeks. I had been quite discouraged until I got a very encouraging e-mail, from a very nice person, at a very successful firm. They weren't hiring, but the e-mail was encouraging none the less, so I continued to push on. That same person recently contacted me for an interview for a position that opened up (what timing?!), needless to say, I am VERY excited. I obviously accepted the opportunity to interview, so now I wait for them to contact me about when. Tess told me I shouldn't sound too desperate, but I think in this job market EVERYONE looking is fairly desperate, and companies have an opportunity to be very selective, besides desperate can definitely be interpreted as eager, right?
I have successfully completed #13 on my list, which is a relief. Being sick and stuck in sweats for 1.5 weeks I lost some self editing. I ran to the store one day for more chicken noodle soup and juice, and I was so irritated that I had to go I just put on shoes and left, and didn't even realize I wasn't wearing a bra until I was already at the store. So I didn't even think about it. Easy enough.
So coming out of my sloth state I am trying to find my motivation. I've been seeing my friends again, I went to a dance class, I covered the whole job hunt thing, I'm back at work, I'm going to force myself to get back to the gym (its been over a month, don't judge me) because I really need to start training for my 5K, and I'm even considering assistant coaching my high school dance team! So, things are moving along, really, they are.
Posted by Hannah at 10:15 PM No comments: